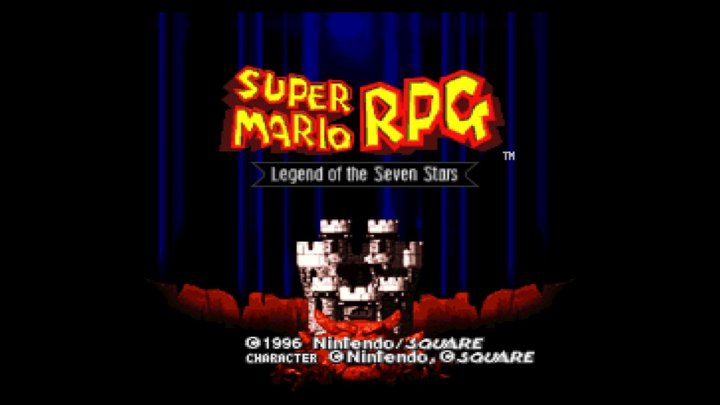 The Super Nintendo era is considered to be a golden age for JRPGs. Final Fantasy VI (known as Final Fantasy III in the US) is considered by many to be the apex of the series. Chrono Trigger is lauded as an engaging time travel story made by a development dream team of genre veterans. EarthBound is that quirky pastiche of a modern-day JRPG where your protagonist is a young boy with a baseball bat. Yet among this pantheon of amazing role-playing games is one that is oft-forgotten; one that is both odd and quirky like EarthBound yet mechanically and musically consistent with the Final Fantasy series. I’m talking about the aptly titled Super Mario RPG: Legend of the Seven Stars.

For those not in the know, Super Mario RPG: Legend of the Seven Stars was released in 1996 for the Super Nintendo. This strange game was actually developed due to a joint-effort between Squaresoft and Nintendo. When it was released, it was truly something bizarre, yet recognizable. Presented in an isometric style with 3D graphics that had never been seen before in a Mario game, Super Mario RPG immediately drew attention from people. Combining the battle mechanics from popular Squaresoft RPGs with the beautifully designed characters and areas from Nintendo, this game seemed like a sure hit from the get-go.

My first memory of Super Mario RPG was when my family went to the local rental store. This store always had a line-up of the most popular movies and video games, the latter of which was the most interesting part of the store for myself and my older brothers. My brothers seemed to know exactly what they were looking for, as they immediately snagged up a copy of Super Mario RPG. I was confused at first. Why did this boxart look so strange? Is this really a Mario game? Why were there random letters in the title? What exactly was an “RPG,” anyway?

When we got the game home, though, I was instantly hooked. The opening video of Princess Peach getting kidnapped by Bowser in glorious 3D was a shock to my eyes. The game immediately starting with Mario running into his castle to rescue the princess seemed really fast, and the weird turn-based combat really confused me. Why couldn’t I just jump? Why do I have to choose my attacks from a list? I may have been a pretty good reader at this time, but this almost seemed like too much input for my young mind to grasp. Luckily, I stuck with it along with my brothers, and the memories we made playing that game will stick with me for a long time.

Story-wise, Super Mario RPG is very much like any other JRPG at the time. You go from town-to-town solving problems and uncovering the mystery of why, exactly, there is a giant sword sticking out of Bowser’s castle. Along the way, you learn about the seven stars fragments and why you need to collect them all. Pretty standard stuff at this point. And yet, the way the story and characters are written have so much love behind them. This game is filled to the brim with some of the most humorous moments in Mario history: from breaking up Peach’s wedding to finding out how stunned Mallow is when he discovers early on that he – a boy who looks suspiciously like a cloud – is not a frog. There are some dramatic moments, to be sure, but there is such a layer of good humor overlaying the entire experience that you can’t help but smile as you play. If nothing else, this game gave us the best depiction of Bowser that we can ever hope to achieve, and that alone makes it a worthy entry into the Mario franchise. 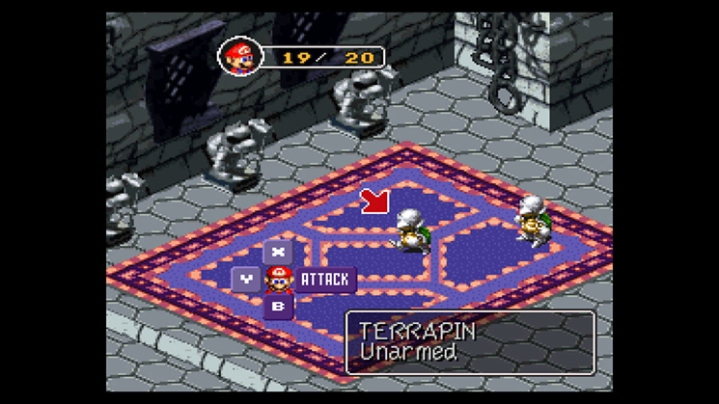 In regards to combat and mechanics, this is another area where the game is, again, much like most JRPGs of the era. Presented in a turn-based style, you select different attacks from a menu and execute them throughout battle. One of the defining features of the battle system has to be the timed button presses you can execute during an action. If you push a button just right as you are attacking, you can do extra damage to the enemy. Similarly, if you push the button right as you are using an item, you can sometimes get a “freebie,” allowing for the use of the item without using it up in your inventory. This ingenious system allowed for a lot of strategy if you are in a pinch or want to maximize how you battle. This level of engagement helps to keep things fresh and make you feel like you are in more control of a battle than you would normally think.

I would be remiss if I did not mention the unbelievable soundtrack. Before she became known almost exclusively as the Kingdom Hearts composer, Yoko Shimomura delivered to us such a  beautiful and happy soundtrack for this game. Using musical elements from both the Mario and Final Fantasy franchises, she crafted so many songs that I find myself continually humming even if I am not conscious about where the music comes from. I can’t count how many times I’ve caught myself whistling “Beware the Forest’s Mushrooms” or the main battle theme without even knowing it! When music can be so ingrained in your mind that you unconsciously think about it throughout the day, you know that’s the sign of an excellent soundtrack.

Super Mario RPG: Legend of the Seven Stars is a stand-out JRPG for me. It was so formative in my maturation as a gamer that I truly don’t know if I would be as interested in the hobby as I am today without it. Without it, I probably wouldn’t have given Pokemon or Final Fantasy a second thought. One of my secrets from my youth is that I extensively wrote out many chapters detailing a Super Mario RPG, Sonic the Hedgehog, and Mega Man crossover fanfiction. This fanfiction no longer remains in any tangible form (thank goodness), but it just goes to show how a particular game can impact you in ways that you wouldn’t even have dreamed possible. Super Mario RPG is just that kind of game for me, and if you give it a chance, it can be that kind of game for you, too.