In the world of video games there are certain key touch-points that stand out…certain landmarks that the industry can collectively look back at and use as a reference for a particular era. In 1997 when Square released Final Fantasy VII, the impact of that one game not only created such a landmark, but also resonated with fans in a way that few games could claim. It was a staple – a stake in the ground that let everyone know where video games were in 1997. An exciting new look for a franchise that had just released it’s finest work to date, Final Fantasy VI, and an opportunity to introduce a set of creative geniuses to an entirely new audience.

In September of 1997, I was 14 years old. I had just finished my first real summer job, had unprecedented amounts of cash, and wanted to buy a fancy new video game console. I walked into the local Toys ‘R’ Us with my mom and walked out with a Sony PlayStation. While elated, having access to a large and ever growing catalog of great games was a bit overwhelming. I didn’t know where to begin! Sure, I knew about the obvious choices like Twisted Metal or Tekken 2, but the amount of games made my head spin. I soon learned that video game magazines were a fantastic source for not only coverage of these games, but reviews and insights as well. I recall walking down the huge magazine row at Books -A-Million and when I got to the video game mags, there was only one thing on each and every (I mean EVERY) cover of those magazines: Cloud Strife and his enormous buster sword. I snatched a couple off the shelf and thumbed over to the reviews. Perfect scores. Every take was filled with praise over Square’s latest masterpiece. Game Informer’s Andy McNamara called it the “best RPG ever made” and everyone’s favorite GamePro hailed the game as “…an entirely new standard against which all other RPGs must be measured”.

Game reviews were one thing. While glowing and promising, would that attract anyone who wasn’t already a dedicated Final Fantasy fan? For FFVII, Square was ready to pull out all the stops. A staggering marketing campaign was unleashed and all of a sudden everyone was seeing FFVII’s beautiful FMV cutscenes during Monday Night Football. While it turned out to be a slightly disingenuous glimpse at the game, it drew in fresh eyes nonetheless. Mine included.

Upon boot up, players are introduced to a beautiful world and a wonderfully eclectic cast of characters. You’re immediately tossed into the conflict between Shinra, an evil capitalistic power company, and Avalanche, a terrorist group bent on loosening Shinra’s grip on the planet. The powerhouse combo of series creator Hironobo Sakaguchi and game director Yoshinori Kitase combined to craft a fascinating tale woven with intrigue, emotional poignancy and deep mystery. Square had successfully captured the attention of a new audience with a classic bate and switch. Not necessarily a bad one, but one where they intrigued us with the promise of fantastic visuals and wound up hooking us with tried and true story telling chops.

During a somewhat tumultuous development cycle, Square eventually found a visual identity with blocky 3D models on top of impressive pre-rendered backgrounds. While this was the primary graphical style, the character models and backdrops would shift to real time 3D during battle sequences. This allowed for more detailed and realized character models which is where the presentation frequently shined.  Beyond the occasional FMV sections, visual treats came by way of the game’s battle summons. Summons were spells that characters could conjure which brought fantastical monsters or gods into your world for a brief moment of assistance. Final Fantasy creators had already built a presentational style that had won fans over, but tossing in the drama and spectacle of 3D battles with these summon spells was enough to make any 14 year old boy’s jaw drop.

Many games have gorgeous visuals, meaty gameplay, a compelling story and soaring soundtracks which serve them well, however there is a brilliance to the way that FFVII weaves these together.

The icing on the cake was the musical work of longtime series composer Nobuo Uematsu. Many Final Fantasy fans point to his work on VII as his crowning achievement. Even in 2020, on the eve of a fully realized remake for FFVII, Uematsu’s score is one which needs no remaster or enhancement. Though limited to the PS1’s midi sound chip, the emotion and power of FFVII’s music reverberates well past technological limitations and stands unequivocally as one of, if not the, most powerful collection of songs in video game history. I can’t think of another score in any medium that so perfectly compliments every scene it’s paired with than Uematsu’s score for FFVII. It’s a masterpiece.

Many games have gorgeous visuals, meaty gameplay, a compelling story and soaring soundtracks which serve them well, however there is a brilliance to the way that FFVII weaves these together. For example, from the beginning players are introduced to the character of Sephiroth – the larger than life hero of Midgar that is built up so much over the course of the first 10 hours of the game that he has reached mythical levels by the time your party leaves Midgar….and you haven’t even seen him yet. One of the first times you do get to see him is through an interactive flashback. Players will, through normal means of gameplay, move through a city with Sephiroth in your party. When entering battle, players attack as Cloud like always.  Sephiroth, on the other hand, is controlled by an AI and unleashes, up to this point, unforeseen amounts of damage to the enemy…I mean, staggering amounts of damage. So here you are….a player who has played this game for quite a bit, leveling up and such and then you are witness to someone who, through the normal gameplay feedback mechanisms slaughters foes effortlessly. With that one move, the game sets up Sephiroth as a villain to be feared and respected, without a single word of dialogue. 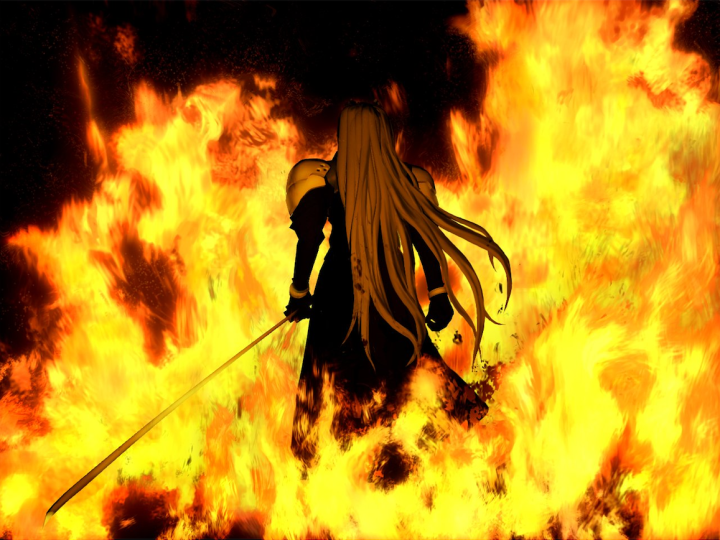 Its touches like this that has helped solidify Final Fantasy VII as a special game, but one of the reasons it’s means so much to so many different people is because it was indeed new for so many people. It was their first introduction into RPGs, much less JRPGs. It wonderfully blended state-of-the-art graphics, sound story telling, world building and characters with a soundtrack for the ages. Truly a landmark in the annals of video game history.