Back in the ’90s, my cousins and I would gather around our Sega Genesis to fight. Not each other, but the wave of thugs, bikers, ninjas, and other assorted enemies in a variety of beat-em-ups. Streets of Rage, Power Rangers, Battle Toads were just a few of the games we frequently booted up. Over the years, there’s been an itch of nostalgia for these kinds of beat-em-ups that have not quite been satisfied unless a return to older consoles is made. A new game by Pelikan13 studio, titled The TakeOver, seeks to encapsulate those classic brawlers with a fresh coat of paint.

As a disclaimer, we were provided a review code for the game on the Nintendo Switch.

The TakeOver follows a trio of vigilantes as they seek to retrieve Megan and Ethan’s daughter who has been kidnapped by an unknown enemy. Connor, a buff military brawler, accompanies them from Steel Haven and beyond in their quest. You arrive at new levels book-ended by comic book format cutscenes that deliver exposition and set up the scenes. Each character is voice acted to varying degree of quality. The art here is inconsistent from scene to scene. There’s times where the art is off, making characters look goofy. Then there are times where the art looks good and looks exactly like a comic from the early 90s would. The story takes some interesting turns about mid-way through the game with it’s inclusion of werewolves and mystical creatures. This is quite jarring and seems out of place with everything else that’s going on. Especially considering that nothing really develops out of that but serves as a sort of distraction, almost like a random filler to make the game longer. While there are two endings to the game that are drastically different, you can replay the final level to get both endings and see which one you prefer.

If you’ve never played a 2D side-scrolling beat-em-up, it’s self-explanatory: you move left to right, beat up waves of enemies, repeat. While this may sound like a boring formula, it’s actually a lot of fun. What makes The TakeOver stand out from other titles in the genre is the ability to string together some elaborate combos. Experimentation and muscle memory are key to finding the right combo to take down enemies and try to not break the chain in doing so. This is something I wish other titles like the recent Streets of Rage 4 had and it helps spice up the game-play enough to keep playing.

In typical beat-em-up fare, you’ll fight through waves of enemies in each level to progress to the next. While the variety of environments was fun to see, later levels feel like long treks through the woods and getting hit with multiple twigs: it’s not necessarily painful, but it gets old after awhile. Thankfully, some levels shake things up by completely changing to a new style of game-play: shoot-em-up (shmup for short). Not only is this one of my favorite genres to play, it was a great way to keep the game-play feeling fresh.

I also greatly appreciated the sprint and dodge-roll mechanics. There were times in levels where barrels would roll at me, or missiles would bombard the screen, and I was able to navigate around them easily enough. Enemy variety is diverse but it’s odd seeing mercenaries in camo pants with guns next to a guy in boxing shorts show up on a cargo ship. I had wished there was a little more diversity in the enemy design to really signify what level you’re in. Perhaps a fisherman with hooks or even a goofy pirate looking enemy on the ship would have been a nice touch. As for the female ninjas, well… let’s just say that parents be warned of them. If you think Megan’s outfit exposes too much skin, she looks modest in comparison. Again, the enemies all look like something out of a classic beat-em-up. But there isn’t enough memorable designs to really make it stand out here.

As you play through levels, you’ll fill up both the Super and RAGE meters. Once the Super meter is full, you press the punch and kick buttons simultaneously to call in a missile strike that devastates anything on the screen. It’s a nice touch as some fights do get tense but I wish there was a distinct super for each character. Not sure what those would look like but again, I think it’d help establish each character as their own. Initiating the RAGE meter turns the screen red as your character hits harder and auto-blocks every punch and kick. If you use them wisely, it can really help you escape some difficult encounters. Another addition to the game-play is a side-arm that, in all honesty, I did not use much. I either often forgot that I had it to where, when I remembered it’s existence, I fired a few rounds and was done with it. Other players may get more use out of it but I found myself not needing it. 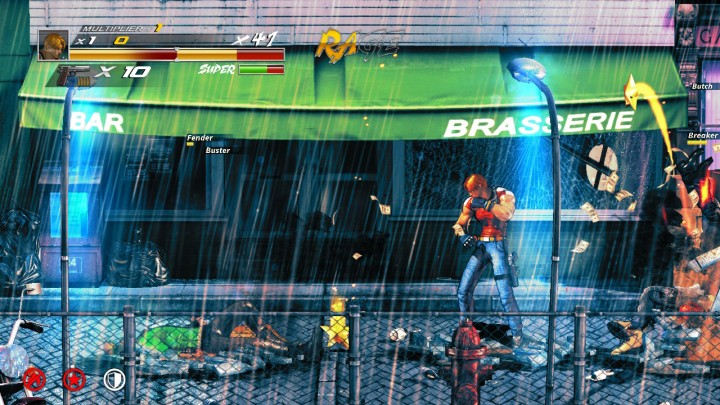 After you finish the Arcade mode, you can test your skill in Challenge and Survival or spend time in Practice to perfect your combos. I actually really liked Challenge as it gives you modifiers to work with to truly test your skill. If you just want to cut loose and lay smack downs, Survival will pit you against an endless stream of enemies to take on. 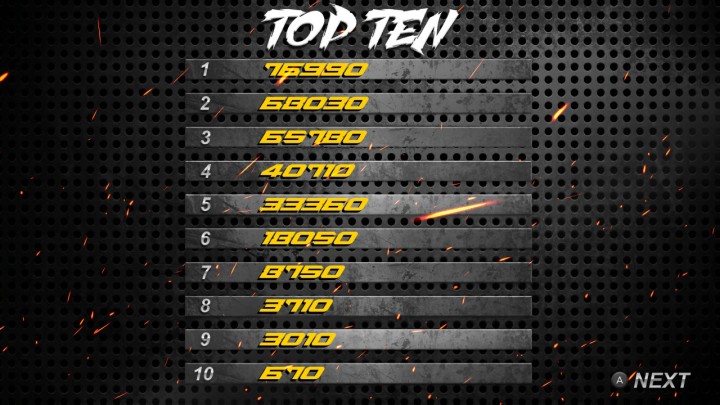 The TakeOver is a solid homage to classic beat-em-ups from days past. However, it’s lengthy levels, clunky AI, and inconsistent visuals keep it from attaining new heights. While I loved the combo system and shift in gameplay, I’m left conflicted about The TakeOver. What’s here has a good foundation for a sequel that, if tweaked correctly, could be a modern-day stand-out in the genre. All in all, I can see the good in The TakeOver and I think that a sequel, with the right tweaks and design additions, will really stand out.

The TakeOver is rated T for Violence, Blood and Gore, Suggestive Themes. As mentioned in the review, the female ninjas do reveal quite a bit of skin (like a very deep V jumpsuit). Some positions of Megan leave her cleavage exposed. While the blood is not excessive and is relegated to spurts when punches land, it is barely noticeable.