Most people’s first impressions of Shulk these days are from the Super Smash Bros. series. If you asked gamers to describe him, they would probably emphasize his red wardrobe, atypical sword, and his ability to see the future. These are all true and accurate descriptions; however, much like the game itself, there is so much more to this story than meets the eye.

Xenoblade Chronicles was first released on the Nintendo Wii in 2010 first in Japan. Interestingly enough, the game was localized first in European regions, eschewing a US release altogether. Fan outcry was immense for this game to be released in the US region, and through the efforts of the fan group Operation Rainfall, it eventually did get released along with two other hotly anticipated Japanese games. The success in the west led to this game being remade for the New Nintendo 3DS, being one of the few exclusive titles on the upgraded portable system, and a “definitive edition” for the Nintendo Switch is scheduled for release on May 29th, 2020.

To summarize this game is truly a mammoth undertaking given how unbelievably dense it is, typically clocking in at 80-100 hours minimum of play time for the majority of gamers. The introductory cinematics combined with Shulk’s opening narration gives you everything you need to know to get started on the game’s lore: two titans, the Bionis and Mechonis, battled each other to the death, and the citizens of this world are living on their corpses. This may sound like a rather morbid way to begin the game; yet, it is presented in such a melancholy way that you can’t help but feel twinges of sadness. The game proceeds from there, detailing the continued battles between the Homs (humans) and the Mechon (robots), mirroring the battle between the titans on a granular level. It is soon after this introduction that you are introduced to Shulk, the protagonist of our adventure.

Without going too deep into spoilers, Shulk’s story is one that may seem stereotypical at the outset yet is presented in a way that feels strikingly raw. An event early on in the game sets the tone for the rest of the story, leading Shulk to despair. He wants revenge on the Mechons for how they murdered his friend, and he will stop at nothing until he accomplishes his goal. This type of inner turmoil and rage is usually not seen in a player-character, and it really helps to see how different of a character Shulk is. He is always presented as calm, collected, and intellectual; yet, in the depths of his heart, he yearns for vengeance and justice, wanting little more than to accomplish his goal of revenge. Along the way, you meet a cast of characters who joins Shulk’s quest, each with their own complex histories and motivations and even personal tragedies, some of which play out right in front of you.

The combat is very unique in this game, adopting an MMORPG-style approach rather than a straightforward turn-based or active time battle system. You have your basic and special attacks that you can activate throughout the battle, but the combat is automatic, with Shulk and company attacking regardless of what inputs you put it. This may seem strange, but due to the complexity of battles and how much is shown on the screen, it helps you not worry so much about the direct attacks and more into specials, buffs, debuffs, and healing, allowing for more strategizing.

The environments and music really set the tone for this game. The gigantic set pieces are gorgeous, even when you are playing on the tiny 3DS screen in the portable version, and the music that accompanies these environments really sets the adventurous mood. One of the fan favorite music tracks, “Gaur Plain,” is heard early on and – in my opinion – is nothing short of perfection. I would routinely wander around this area just to hear the music, and it even compelled me to purchase a 3DS theme that would play that specific theme whenever I turned my system on. While the graphics may seem rather muddy and bland by today’s standard, it is truly amazing how they were able to pack this massive game onto not only the Wii, but also the New Nintendo 3DS. 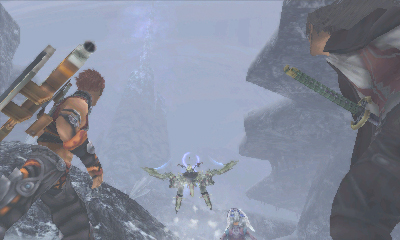 It is rare that the story of a game and its characters are treated with equal importance, but Xenoblade Chronicles really takes the time and care to develop both simultaneously. While the story may seem like a straightforward revenge plot, it quickly becomes something much, much bigger than that. If you are familiar with other games that bear the “Xeno-“ prefix, then you can probably predict what the game would eventually become. While it is difficult to talk about the main plot without going into spoilers, make no mistake that this game is rife with Nietzschean philosophy, especially regarding nihilism and even the doctrine of eternal return. This is a game that will (and should) make Christians uncomfortable, especially by the end, and this is important to know before going in.

As Christians, there is a lot we can take away from this game even with its flawed approach to philosophy and theology. Make no mistake: this is definitely not a game that is friendly to Christianity. Right from the get-go with the allusion of the titans, themselves representing dead gods, you can see that there is a fundamental worldview difference between Christians and the creators of this game, especially when you dig into his other works. Many questions should pop up for you as you play the game:

Because of the very real worldview applications of many of its themes, Xenoblade Chronicles could be seen as being dangerous to one’s walk and faith, and if you are easily influenced by these types of ideas, I wouldn’t recommend it for you; however, if we can approach these concepts and the underlying worldview with our distinctly Christian standpoint, we can learn from them and learn how to best address them in the world we are living in today. And that is why I believe that Xenoblade Chronicles – with all its flaws and fundamental misunderstanding of the universe – is a beneficial game for us to play and engage.

Given that the definitive edition is releasing on the Nintendo Switch in the middle of a global pandemic – a time period in which there is a lot of unrest, uncertainty, and confusion – there is no better time to give it a try and see how it can inform you in your interactions with the world. Whether you play it on the Wii or 3DS in its original form or experience it through the definitive edition with its further narrative opportunities, Xenoblade Chronicles is a game that you will not easily forget.

And maybe – just maybe – it will spur you on in your Christian walk as you put to death the philosophy and vain conceit of this world.