Two are better than one, because they have a good reward for their toil.

The chords that Spirit of the North attempt to strike are not easy to hear. They are subtle and often require human experience to fully extract. The notes won’t tickle every ear and the overall message may fall flat to many players, but the song is still worth singing even if only a handful will draw true inspiration and meaning from this game. Spirit of the North was developed primarily by two men and displays some rough edges that may turn off some players, but there is a good game and an inspiring message underneath this focused adventure.

Spirit of the North is an art based adventure game akin to titles such as Journey and Abzu. As a classic looking red fox, the player will set out on a snow capped mountain following an ethereal blue fox. The player will soon discover that the power to revive a once lost civilization rests within the red and blue fox. Companionship is at the core of this game. Relying on the blue fox is a regular routine and as time goes on and your powers progress, the challenge is ramped up and the reward is heightened. Spirit of the North does a great job of symbolizing the necessity for companionship through the trials that the red and blue fox encounter. I am reminded of the 4th chapter of Ecclesiastes when Solomon writes, “Two are better than one, because they have a good reward for their toil. For if they fall, one will lift up his fellow. But woe to him who is alone when he falls and has not another to lift him up!” Like most time-tested companionships, this adventure is emotionally up and down, but offers a great conclusion which caps off the roughly 6 hour experience.

Game mechanics are introduced slowly throughout the adventure and never feel overly complex. Puzzles begin to tie in with each ability as they are unlocked. Spirit energy is the name of the game for our red fox hero and you’ll need it to accomplish most functions, solve puzzles, and traverse the beautifully rendered world. One ability, introduced mid-game, has the blue spirit fox disembody from the physical red fox which, for a limited time, gives it freedom to explore areas previously inaccessible. Each area also has hidden collectable staffs which need to be returned to equally hidden corpses. Successfully returning a staff to it’s rightful owner sets the spirit of the corpse free from the darkness and returns them to the aforementioned lost city.

Throughout the adventure the player must partake in a fair share of platforming which unfortunately can be cumbersome due to some generally clunky controls. With no way to directionally move the fox mid-jump, you simply miss certain platforms because you can’t course correct mid-flight. It’s an odd sensation and it creates moments you can’t help but feel could have been avoided with a more nimble protagonist. Detailed platforming isn’t required, so frustration is kept to a minimum, but moving the fox around with precision can sometimes be a chore. Overall there is a good balance of gameplay variety and focus for this type of game which lends itself well to quality pacing throughout. Save for a small handful of times where I felt stumped as to where to go next, the game flows quite well and doesn’t overstay it’s welcome. 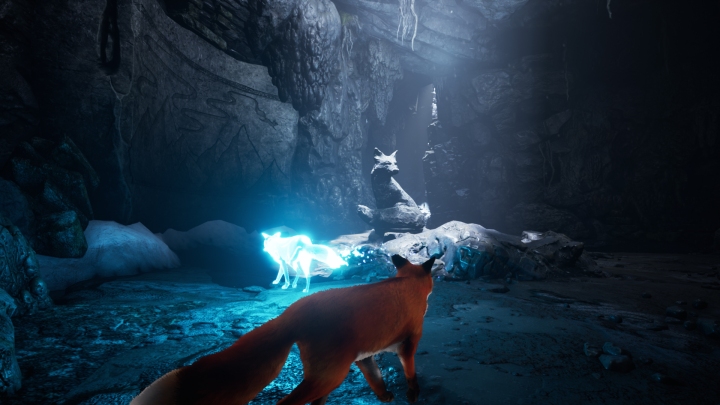 Spirit of the North is the debut game from Jacob Sutton and Tayler Christensen who make up the entirety of Infuse Studio. The duo have a background in building game environments and it absolutely shows. The world that Infuse Studio has constructed for SotN simply does not look like the efforts of two people. One of the main hooks for me was simply surveying the beautiful environments in which I found myself. From the gorgeous lighting in a dark cave to wide open grassy fields flanked by rocky cliffs, Spirt of the North shines most when it’s showing off it’s fantastic art.

Although there is no dialogue or text in the game, the wonderful vistas are accompanied by a great score. Composer Joseph Gifford primarily uses piano and strings to blend a beautiful, melancholy, and atmospheric soundtrack together that truly does compliment the game well…too bad there just isn’t that much of it. Throughout my adventure I heard the entirety of the soundtrack innumerable times. After it was over it would just boot back up and loop. There would be poignant in-game moments that the music would be tied to, but too often it simply felt like the soundtrack was on repeat. So while the music was good, I had grown tired of it by the time credits rolled.

Indeed Spirit of the North knows what it wants to be. It is a focused and beautiful adventure about companionship and discovery. It’s scoped down to a fine point so that the strength of it’s developers could shine and the subtle story could envelope the player in this mysterious world. Fans of the genre will find a lot to like here and although it struggles with some clunky controls, Spirit of the North is an extremely solid debut and a noble effort for the likes of two background artists.

Spirit of the North is rated E for Everyone. The ability to control a fox is attractive to gamers of any age, so feel free to let the kids enjoy this adventure and see what they derive from it. You may be surprised! Do keep in mind there are some dark caves which could frighten some children as well as various skeleton corpses lying around.