Tips to Start Your Journey Right

At long last, gamers in the US will get to experience the original Dragon Quest trilogy on a home console once again. Square-Enix recently announced that the first three Dragon Quest games will be getting ported to the Nintendo Switch on the same day as Dragon Quest XI S: Echoes of an Elusive Age will be releasing on the same system (which is this Friday). This is a truly genius move on their part due to the sheer number of references DQXI has to the original trilogy, both superficially and story-wise.

The first three Dragon Quest games were released in the US on the NES. The title was changed to Dragon Warrior in the States due to a possible copyright problem with a board game called “DragonQuest.” The first Dragon Warrior did not have the greatest of sales, to the point where Nintendo of America even started giving away copies of the game to those who subscribed to their Nintendo Power magazine. Dragon Warrior II and III were also met with similarly abysmal sales, eventually ending localizations to Nintendo systems in the States after Dragon Warrior IV.

The versions of this Dragon Quest trilogy (commonly dubbed “The Erdrick Trilogy”) are neither the NES originals, nor the remakes released on the GameBoy Color; they are slightly modified ports of the mobile games that were localized and released a few years back. Along with updated graphics, and a smoother English translation, these mobile ports also benefit from quality-of-life updates, such as the quick save feature and adjusted difficulty. While some may miss the Middle English, KJV-styled localization of yore, Dragon Quest games have a history of muddled releases in the western world, so almost any release and nod from Square-Enix is celebrated among fans.

You might be wondering: where do I start? Should I finish the trilogy first before jumping into Dragon Quest XI? Will I be missing something if I start the newest game first? And just how archaic is this turn-based battle system, anyway? As I have been making my way through the Dragon Quest series for the first time, I hope to answer these questions with this brief primer and help more western fans, new and old, embrace this amazing series that has stood the test of time.

…the first Dragon Quest is a great way to dip your toes into the franchise and see if you like it.

The first Dragon Quest definitely feels the most limiting to those who have been molded by JRPGs. You control a single character in his quest to rescue the princess and beat the Demon Lord. It is a very simple story that has been told time and time again. The unique thing about the first Dragon Quest, though, is in its length. Quite short for a JRPG, clocking in at 8-10 hours of total playtime. For those who have strict time limits on their gaming, this will be a refreshing change of pace in comparison to how long it normally takes to beat JRPGs.

If the Switch port retains the quick save feature from the mobile versions, then this game will feel like a piece of cake in many ways. What really hindered the NES original is its isolation of its save point in one specific location on the entire world map. For retro gamers, this isn’t a problem, but if you really want to enjoy the story and not have to worry about outdated save mechanics, this will be an absolute blessing. While it is easy to cheese the quick save feature and basically use it like a save state, it is really helpful for those who do not want to go through the game on NES-level difficulty.

One of the main aspects of the original Dragon Quest game is grinding. Basically every problem can be solved by more grinding. Some hate it, some love it, but I think we can all agree that grinding is easier to endure when you are playing portably. Thankfully, with only one character to work with, grinding tends to move more quickly than if you are worrying about the HP and MP for three or more characters.

Ultimately, the first Dragon Quest is a great way to dip your toes into the franchise and see if you like it. If you can work through the first few hours and enjoy it, then it’s probably a series for you. 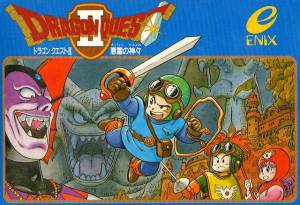 …this is a tricky game to recommend for anyone other than the “hardest of core.”

This is a very divisive entry. The story remains very similar to the first game, but with the addition of party members and a more expansive world. Taking place a century after the first game, you and your party of royalty are tasked with saving the world once again.

This time, however, things are a little bit more difficult. As a matter of fact, things are a LOT more difficult. Dragon Quest II is notable among fans as being one of the hardest games in the entire franchise. Due to having more party members this time, monsters attack you relentlessly. Being able to only target single enemies or specific groups of enemies with your weapons and spells makes some of the mid-to-late game grinding areas an absolute chore.

The story is a significant upgrade from the first one. Rather than retread the typical damsel-in-distress storyline, the focus with your party of three is the rebuilding of their kingdoms and world. You start out by recruiting a prince and princess (they are not only your cousins, but royal descendants of the hero from the first game) and travel the world, even going back over areas that you visited in the first game. It is certainly a nostalgia trip, akin to visiting Kanto during Pokemon Gold and Silver.

Unfortunately, this is a tricky game to recommend for anyone other than the “hardest of core.” The difficulty spikes start early in the game, leading to many party deaths. The difficulty hardly ever lets up, though thankfully, some of the balancing issues are tweaked for the mobile version. Overall, though, if there was one game in this trilogy that you had to skip or leave for last, this would be the one.

This is also one of those games that really shines in its story through how it plays with your expectations.

Many people consider Dragon Quest III the pinnacle of the entire franchise. There was even an urban legend surrounding it (grounded on some truth) that the Japanese government had to outlaw the sales of future Dragon Quest games after the third game came out due to children and businessmen ditching school and work to stay home and play the game. While specific facts around this event remain obscure and ambiguous, there is no denying that Dragon Quest III was the entry that caused the series to blow up in Japan.

In order to avoid spoilers, I will not discuss the specific story elements in this article; however, you can rest assured that the narrative is a big focus for this game. You are a child following in the footsteps of your father, a world-renowned hero that is celebrated by every kingdom. As you travel the world to train up to fight the big evil in this game, you hear tales of what your father has done constantly throughout. This focus on family is pivotal and helps to shape the narrative around you existing as an individual in this world.

The gameplay continues on from what the second game established with its party system, but with a key difference: instead of recruiting characters to your party, you instead craft your party around characters you create with specific jobs. You build up each character in the job you choose, then you can mix-and-match different jobs later on in the game when you are allowed to change them. This adds a great layer of complexity in how you form your party and is where the game really shines.

This is also one of those games that really shines in its story through how it plays with your expectations. Again, without delving into spoilers, there are times when you think you are finished, yet something changes in the story and goes against what you expect to happen. Twists abound, and you have to adjust to what you are doing to work with that. It can be frustrating, certainly, but it is an example of early storytelling that really works well with the JRPG genre.

Given some of its slightly outdated mechanics, and sheer difficulty, my recommendation for playing order for these games is to focus on the first and third entries. The second entry is not vital to play to understand the story of the third game and, given the difficulty spikes in that game, you may get frustrated and not want to continue into Dragon Quest III. I would save the second game for very last, and only if you can embrace the challenge.

This trilogy is a special set of games in the history of Japanese role-playing games. Some may decry the series as being formulaic and archaic, perhaps even too set in its ways. Combat-wise, not much has honestly changed with the combat and presentation over the years, even down to the use of the same NES-style sound effects and musical cues in modern versions. For the JRPG enthusiast, though, these games were absolute trailblazers in the field, setting the standard for the genre for many years to come.