If you like JRPGS on any level, this is one to keep an eye on.

Grand Kingdom is a beautiful new Strategy Role Playing Game brought to PS4 and PSVita by NIS America.  I’ve been fooling around with the Vita edition for a little while now and I thought I’d share my initial thoughts.  Though I haven’t fully grasped the game mechanics or experienced too much of the story, I’ve been really enjoying myself when I have time to play.  Smashing foes has been quite enjoyable in both small time increments and longer play sessions. Anyway, the story begins something like this: We find ourselves on a continent that is in a perpetual war between four kingdoms.  As the leader of a band of mercenaries, you have a perfect way to get rich.  Fight for glory in the story-driven campaign, complete side quests for loot, or join PvP wars that are going on every day. 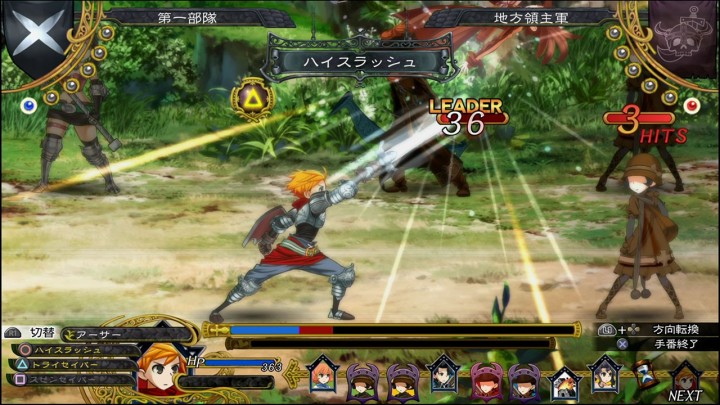 The battle system is really fresh, as it’s different from most strategy role-playing and tactics games.  Quests are split into two phases: movement and battles.  Rather than fighting on a grid-based map like Final Fantasy Tactics or moving characters one at a time over a 3D map like Valkyria Chronicles, Grand Kingdom battles are fought on a series of three “lines” in a turn-based manner.  You have your units move along and jump between the three lines in order to get into attack range of enemies or evade their attacks. Some units are able to attack from one line to another, as long as their range/skills allow it.  There are “objects” that are on the battlefield that may block your path, shield enemies, or contain traps.  Sometimes you have to destroy them with attacks before being able to reach the enemies on the other side. But be careful; sometimes barrels explode.
The attack ranges of the different classes vary greatly, making strategies quite fun to come up with when planning the makeup of your troop (you can have six different teams, called troops). Archers must shoot from afar unless utilizing special skills.  Melee fighters have to get up close. And there are some mid-ranged units somewhere in the middle.  There is friendly fire damage, so you have to be very careful when attacking. I’ve killed my own units a few times and this can be very frustrating.  It’s easy to avoid with melee fighters, but for ranged units shooting at enemies close to your own units or using skills/attacks with area damage can be risky.  The system of ranged attacks puts a moving target on the ground and you must press a button when it is under the enemy you want to target.  The attacks seem to come in from an angle and too many times I’ve hit my own units when I thought there was no way it should have happened.  I’ve also thrown acid in my own face more times than I’d ever care to admit. Here’s how: The arc that shows where a thrown object is going to travel before hitting the ground is much more of a rough estimate than totally accurate. It can look like the item will not hit your own soldier or that it will land in between two enemy units and hurt both of them, but then when activated it will only hit your own unit or it will hit only the first enemy in the group, causing damage to only them, or worse, to them and a unit of yours who looked like they should have been out of harm’s way.  These annoyances aside, the combat is really fun and different from anything I’ve experienced in a game before.
Movement: 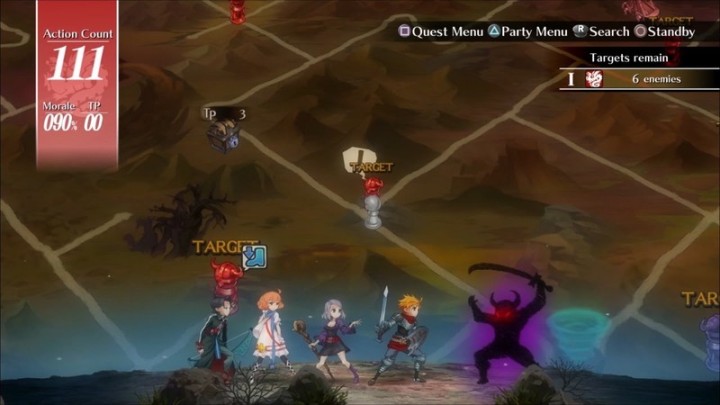 The movement phase is done on what looks like a grid-based game board with paths, obstacles, enemies, treasure chests, resource gathering points, defense points, and sometimes siege weapons.  As you move, a counter of sorts tracks how many moves you’ve made and how many quests have move limits. Battles take up moves as well, and the number of turns it takes you to complete the battle determines how many moves it will cost you.  Winning a battle gives you TP, which are points you can spend on using skills to change the map, battle conditions, teleport to specific points, open some chests, and more.  As you move through the maze-like maps, enemies move as well.  You can time your movements to avoid combat, intentionally battle enemies in specific areas, or move battles where siege weapons will make your fight easier or harder.  Siege weapons show their area of attack and if you engage in a battle while in range of one of them, then after every character on the map has had a turn, a projectile with area damage will land on the field, dealing massive damage to friends or foes in their range (which is highlighted in the battle map at the beginning of the fight).  There are some hidden enemies and item locations that can be shown with skills (if you have enough TP as well as a soldier with that specific skill), shops, healing points and random events that can be rewarding or punishing depending on how you respond.  It’s pretty straightforward, though I’m sure as the game goes on (further than I’ve played) things get more interesting and intense.
Units and Troops: 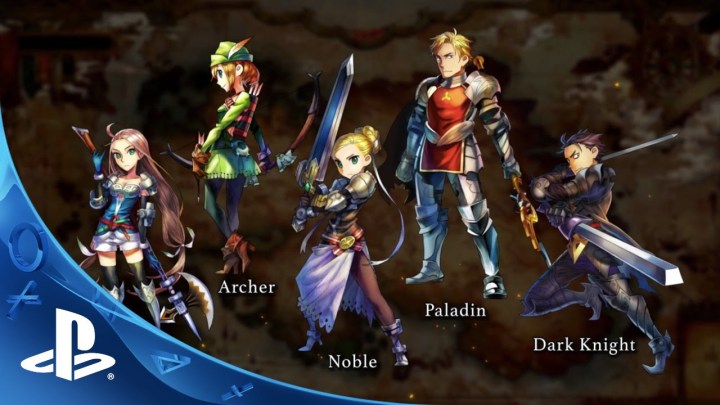 There are more than 15 different classes you can form your troops with, from standard sword and board fighters to thieves, voodoo skull mages, gunners, medics, and people riding huge fire-breathing beasts.  They all have random attribute bonuses and depending on their attributes/class, the price to hire them changes.  I imagine because of the attribute bonuses that come with the random classes able to be hired, the members of my troops will change often as the game progresses and my war funds increase. Attributes are leveled up by assigning stars to them after your character levels up by surviving combat (KOed units gain no XP) or by completing quests.  As you level up attributes, your units will gain skills.  You can have up to six troops that will generally consist of four soldiers, so a balance of strengths/weaknesses is key.  Customization is heavy in this game, from gear and attacks/skills to appearance and battle formation.  You can craft, buy, find, and be rewarded with new equipment in a number of ways, but there are level and class requirements for all gear.  In my game, I beat a side quest and was awarded a shield with a level requirement of 24 when my highest level was six.  There are characters in the story-driven quests that are not used as your typical troop mercenaries that seem to have stories behind them, but the ones you hire and use primarily do not.  This may be an issue for some, but thinking about this from a managerial perspective, maybe it is actually a good thing since the business we are dealing with is death. 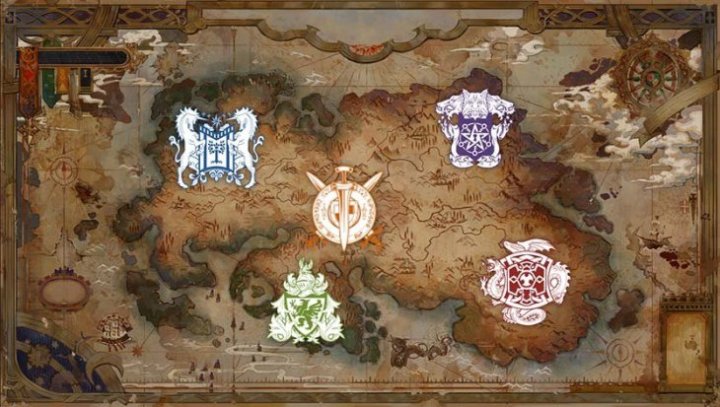 The four major empires on the continent are at war with each other constantly. As a mercenary leader, you want to profit from this situation as much as possible.  This is where some PvP action happens.  You form a contract with one of the countries, as do all other players who choose to participate.  When allied to a country, you gain access to their capital city, giving you the opportunity to buy from their shopkeepers, talk with their citizens, invest resources, and do country specific quests.  You gain reputation with the country you have pledged yourself to and get rewards if your country wins the war.  The war is fought by either actively doing quests against other players, which so far has been racing to gather specific resources from the map first or to defeat a certain number of monsters before the others can do the same.  This may be different as you get stronger, but this is all I’ve done so far.  You can also dispatch one or more of your six troops to fight automatically while you keep a troop to yourself to do other quests not related to the war.  I’m not going to lie, I haven’t spent much time trying to figure out the reward system of the wars, but the troops that you assign to automatically fight will gain experience.  I’ve been leveling up units without doing much, and that’s nice.  I’m sure there’s a video out there that would explain it to me, but right now I’m having fun with other areas of the game and don’t really care.

I totally recommend this unique and (maybe too) deep SRPG to anyone who likes tactical gameplay or just wants something new to play around with.  While I may never beat or platinum this game due to the amount of time that seems to be required to do so, I can see myself playing it for a very long time.
GG & Amen