Last week, the Pokemon Company showcased a smattering of new games in their new “Pokemon Presents” presentation – a direct-to-you streaming events directly inspired by the Nintendo Direct format of delivering gaming news to you, the player. At the end of this first presentation, they quickly announced that they would be showcasing more Pokemon news on June 24th, 2020 – just one week later!

The presentation came and went and there is a lot of buzz about the singular announcement that they made. Did they live up to the hype? Were expectations too high and left unmet? Let’s take a quick dive into what was announced and what seemed (conspicuously) absent.

Pokemon Unite
After a quick announcement letting us know that Pokemon Cafe Mix has now been released on the Switch and mobile devices, the presentation immediately cut to a trailer for a new game. It started out by telling you about how Pokemon was influential in getting people together to trade and battle, and then proceeded to show you the logo for the new game: Pokemon Unite.

I felt that this trailer was quite reminiscent of how Pokemon Go initially played on the nostalgia of growing up with Pokemon, and I think it was effective in getting us to think about the Pokemon legacy. After all, it’s been well over 20 years since the franchise started, with next year being the 30th anniversary of the release of Pokemon Red and Pokemon Green in Japan. Fans have come and gone, but the games still endure with each new generation bringing more and more people in. That is exciting.

Pokemon Unite is a 5 vs. 5 cooperative battle game that will be released on the Nintendo Switch and mobile devices. Many fans are already drawing comparisons between this game and League of Legends, a super popular MOBA (Multiplayer Online Battle Arena) that is played all around the world. The presenters even held a match between two different teams composed of different internet influencers and employees at the company.

Unfortunately, the newest announcement seems to have caused some consternation among the Pokemon fanbase. Speculation ran wild as soon as the Pokemon Company announced there would be a second “Pokemon Presents” happening one week after the first. Surely this would have to be something huge, right? Some fans were clamoring for additional entries in the Let’s Go series taking place in Johto, other fans were holding out hope that remakes of Pokemon Diamond and Pokemon Pearl would be announced on Switch, and still other fans were hoping for a true Pokemon Musou game to finally release (okay, that was just my particular wish). With this new release being nothing of the sort, many fans are feeling bitter and upset at the Pokemon Company and Nintendo in general. 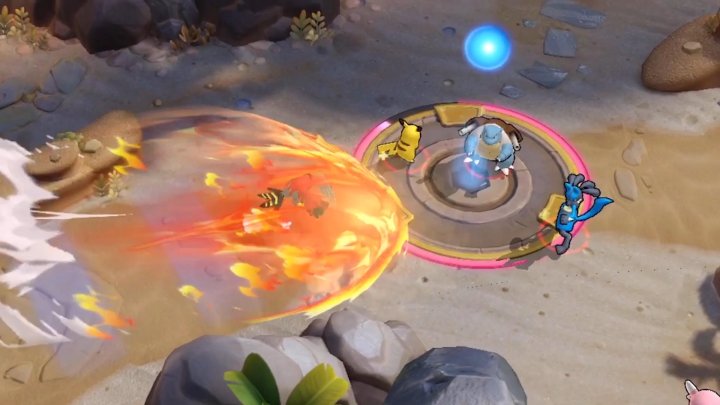 Personally, though, I am very excited by a release like this! This is not the type of game I would normally play, but with it being released on the Nintendo Switch, I feel like I could actually dig into the metagame of a title like this. It has been quite a few years since I have done any competitive gaming, and I think a game like this might be able to scratch that itch for me.

There are still details that have been left unclear. They specified that the game would be “free-to-start,” so that begs the question: what are you going to be paying for? The Pokemon Company has been pretty good about not overcharging for in-app purchases in their free-to-start 3DS titles, but what you are going to be allowed to buy and how it will affect the game remains unseen.

What did you think of this announcement? Are you excited by a new type of Pokemon game? Do you feel like they could have done better? Were you hoping for something else? Be sure to comment and let us know your thoughts!