…is it good? Is it worth your time? That depends on the kind of gamer that you are.

During the past year, I have been very focused on working through my gaming backlog thanks to the year-long #BacklogGolf game in the “Backlog Book Club” FaceBook group. The main series I wanted to focus on during 2019 was the Dragon Quest series. I had dabbled with a few of the games in the past and had only finished Dragon Quest VII up until that point, so I saw this as a challenge to finally delve into this monolithic JRPG series.

The latest entry in this franchise – Dragon Quest XI – finally saw a western release in late 2018. Not only had I purchased the PS4 version, but a year prior, I had also purchased the Japanese-only 3DS release to play on my imported Nintendo 2DS. I had made great progress in that version; however, not being fluent in Japanese made continued progress through that game difficult.

The purpose of this article is not to be a review per sé, but to act as a recommendation of-sorts to propel you to give this game (and series as a whole) a chance. The only interaction I have had with the Switch version up to the release date was through the demo, but having the extensive experience with both the PS4 and 3DS versions offers me a unique perspective in the English-speaking Dragon Quest fandom. 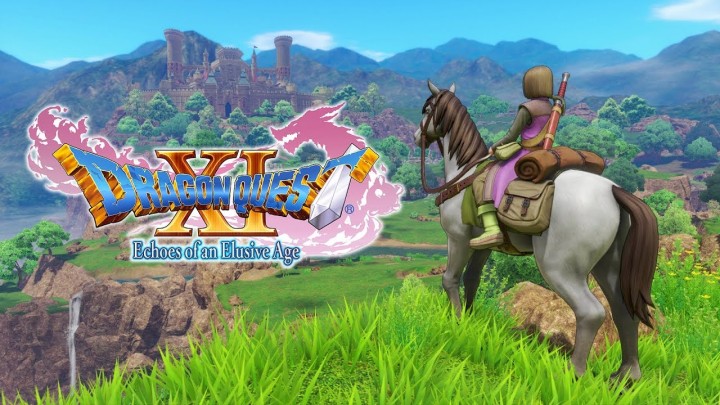 Longtime fans of the franchise will be pleased by this game’s placement in the franchise’s timeline, and hopefully newer fans will take this opportunity to see how it connects to the games that have come before.

The story to Dragon Quest XI is unique in many ways, though it starts out with a typical “chosen one” narrative. Your main character is The Luminary, a chosen person destined to take down whatever dark and evil force is currently threatening the world. This is the setup you find immediately with the opening movie and the first few hours of the game; however, Dragon Quest games like to play with your expectations, and you are pretty quickly thrust into an uncomfortable position as a fugitive around the world. Your party understands the role of the Luminary and assist you, but this power and status will also be a boon to you as you travel from town to town.

Without spoiling the narrative, you will find that the story goes into some very dark and serious places. Hidden underneath the light-hearted Toriyama art style is a heart-wrenching tale involving family, personal loss, belonging, and betrayal. Dragon Quest games are not afraid to delve into more serious topics like these, and the eleventh entry is no exception.

The specific end points to each act of this game, though, is a real treat. Again, without going into spoilers, there are particular choices you have to make that affect the endgame and postgame you will play. One of these choices in particular is heart-wrenching because of what it means for the path that you chose. Longtime fans of the franchise will be pleased by this game’s placement in the franchise’s timeline, and hopefully newer fans will take this opportunity to see how it connects to the games that have come before. 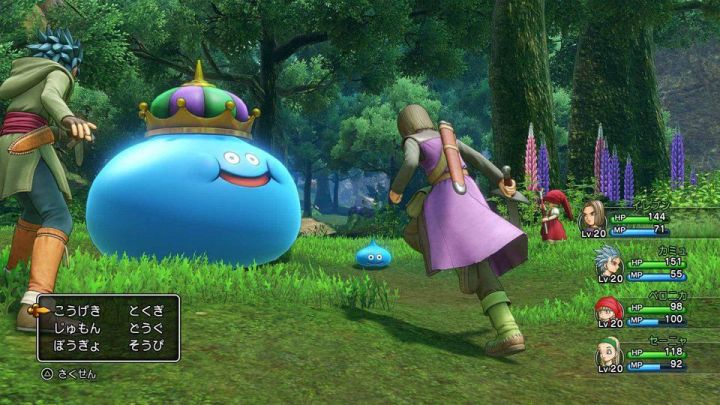 You can imagine my joy when I discovered that the Switch release would retain not only the 3D environments and graphics from the PS4 version, but also the 2D 16-bit mode exclusive to the 3DS. What you have here is, functionally, two very different ways of playing the same game. Do you prefer retro graphics with sprites? Do you enjoy the lush and beautiful 3D environments? You can freely change between these two styles on the Switch version, living up to its tagline as the definitive version. This is truly the best of both worlds.

The difference in sound quality is quite staggering, even for someone like me who appreciated the retro sounds of the midi soundtrack.

Of course, the visuals do not look as crisp and detailed as the PS4 version. After all, the Switch might be a powerhouse in many areas, but graphical excellence is not its strong suit. Thankfully, if you are used to the stylization of Breath of the Wild, you will feel right at home playing Dragon Quest XI. The distinctive Toriyama art style is very well-suited for the Switch, almost like an anime is playing out in front of your eyes with your direct control. The monster designs are simplistic yet timeless, beautifully rendered in 3D with their own distinctive styles and body language.

In the 2D mode, you will find that the 16-bit art style holds up quite well. While not being as dramatic or striking as Octopath Traveler, the design choice holds up very well, and you will immediately notice a difference between these sprites and the ones on the modern, re-released versions of the original Dragon Quest trilogy (which releases the same day on Switch). If you count Chrono Trigger, Final Fantasy VI, or EarthBound as some of your favorite games, you will definitely want to test out the 2D mode on your own. You may even like it more than the 3D version!

While not related to visual presentation, a special note has to be made about the music in this game. While I was never bothered by the midi compositions in the PS4 version, there was a great outcry from the fans about how it was the worst aspect of the game. Square-Enix must have heard fans because the Switch version is outfitted with the orchestrated music. The difference in sound quality is quite staggering, even for someone like me who appreciated the retro sounds of the midi soundtrack. Audiophiles will be quite pleased by this newest addition, especially if they want to hear the orchestrated versions of many classic Dragon Quest tunes. 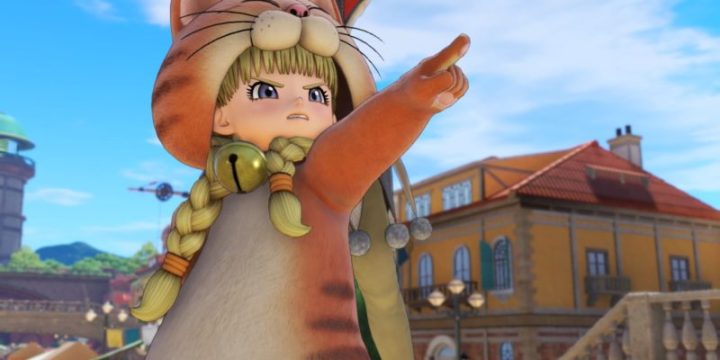 The game is filled with quests (which makes perfect sense because, y’know, being Dragon Quest and all), and it isn’t afraid to make you fetch the most random items.

The combat in Dragon Quest XI is about as traditional JRPG you can get – with some exceptions. One of the standout features in the franchise is the ability to assign battle tactics. These essentially function as an auto-battle mechanic, but allows you to have more control over the style you want to assign to each party member. For example, if you assign the Fight Wisely mechanic to a party member, the computer will use its best judgment in choosing attacks. If you assign the Don’t Use MP tactic, the character will never use a move that ever uses MP (thus conserving your points for when you really need them). You can adjust these tactics whenever you want, whether in or out of battle, and you can assign them individually or for the whole party, even your main character. This allows battles to play out on their own during grinding sessions, freeing you up to divide your attention during these times.

Other than the tactics system, the battles function exactly as you would expect a turn-based battle system should. The position of your characters in the 3D mode depend on which style of battle that you want. You can choose between traditional, where your characters stay in one place, and a free-roaming mode that allows you to walk around in battle. I never found the latter setup very helpful, so I stuck with the traditional setup. In the 2D mode, the battles are presented almost exactly like the Dragon Quest games of yore; you see the line of enemies to defeat and make choices from menus at the bottom. Retro gamers seasoned in JRPGs will recognize that the battles look very similar to how it’s presented in EarthBound (which was itself inspired by the Dragon Quest system, so it comes full circle).

While I did make the comparison to Breath of the Wild earlier, you are more limited in your movement than in that game. You cannot scale mountains as freely and many gamers might feel that the limited movement is rather dull in comparison to more free-roaming games. Since I cut my teeth on the Dragon Quest formula by originally playing 7 through 9, I never really felt limited in my movement; your mileage may vary depending on how reliant you are on modern controls.

The game is filled with quests (which makes perfect sense because, y’know, being Dragon Quest and all), and it isn’t afraid to make you fetch the most random items. 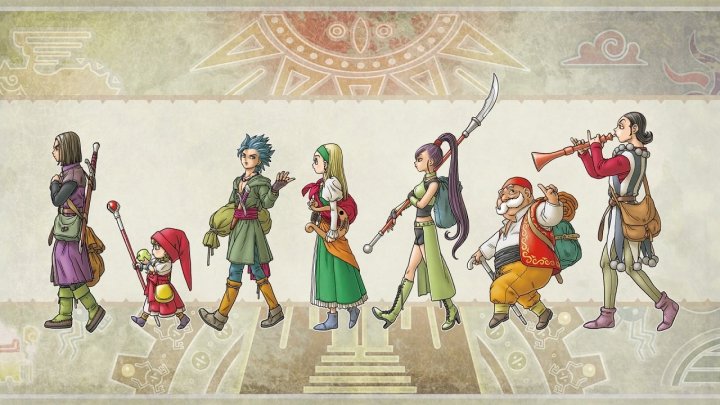 This is a game that is very near and dear to my heart. I have gone all-in on this franchise and in this game in particular because the Switch installment will be the third version of the game that I purchased.

But is it good? Is it worth your time? That depends on the kind of gamer that you are. If you like traditional JRPGs and don’t mind working through menus, you will find this game enjoyable. If you like grand stories that play with your expectations, you will enjoy this narrative. But if you know you don’t enjoy drawn-out plot lines or turn-based mechanics, you can safely pass on this game. It delivers more of what Dragon Quest fans want, for better or worse, and you either love it or hate it.

For me, personally? This is exactly the release I wanted from the beginning. The portability is a must for any JRPG I play these days, and it will be nice to explore the full breadth of this world on-the-go. And being able to go back and play it again with a completely different graphical interface is something I’m actually looking forward to because it really feels like two different gaming experiences.

Dragon Quest XI is an amazing distillation of the JRPG genre. Fans of the franchise will eat it up like candy. Those who dislike JRPGs should probably steer clear. But it is one of the most accessible games in the genre to-date. If you’re up for a challenge, this would be a great game to add to your Switch collection.

One thought on “Dragon Quest XI: Is It Worth It?”