Remedy Games is responsible for putting out some truly unique games. Their latest game, Control, is no different in that regard. There is a lot to enjoy in Remedy’s latest game, even if it’s held back by some antiquated features and technical hiccups. Let’s dive in. 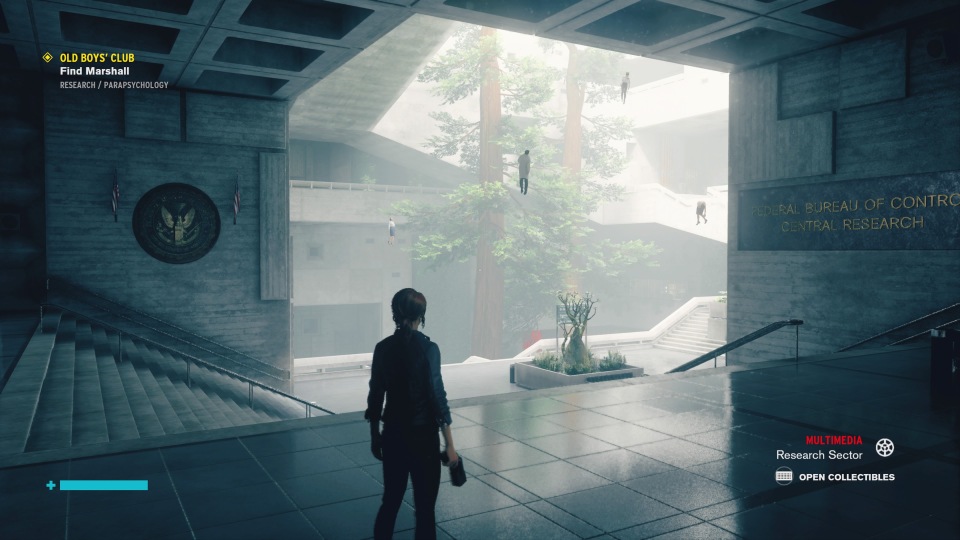 In Control, you control Jesse Faden as she arrives at the Federal Bureau of Control in search of her brother. The mysterious entity, known as Polaris, has led her here and it’s in this building that you learn things have gotten out of control. Okay, I promise I’m done with the puns. Jesse finds Director Trench, dead in his office, with his service weapon lying next to him. Upon picking up the weapon, Jesse comes face-to-face with The Branch, an ominous, floating pyramid in an astral plane of sorts that gives her the role of Director. It is now up to Jesse to find out how the mysterious Hiss invaded the FBC, put a stop to it, and find out how her brother fits into all this.

The story of Control is Remedy’s weirdest yet. While Quantum Break was easy to follow, Control falls more in line with Alan Wake in its para-natural setting, events, lore, and characters. While you’ll be able to piece things together as you play, it would aid you greatly in reading the documents that you find around the different departments of the Oldest House, the building the game takes place in. Admittedly, there is a plethora of documents to pick up and Remedy made the font size of the documents almost too small which I can see turning people off from reading them. You will also encounter different agents of the FBC who fill in the gaps and offer an array of side-quests to complete.

Remedy has this affinity for live-action videos in their games and they are present here in Control. I found Dr. Darling’s videos to be the most enlightening (and fascinating) as he breaks down what the different Objects Of Power are, how they work, and what led to the events of Control. They serve to show a natural progression of the events after the Hiss infiltrates the FBC and begin corrupting agents. The Threshold Kids feature makeshift dolls that explain what the FBC does while giving you an unsettling feeling that there are some truly sinister things at work within the FBC. The Threshold Kids gave me a very unnerving sensation while watching, as it seems even the dolls are becoming possessed by the Hiss in later videos.

I will admit that the story is very confusing when you first play. Almost to the point that I think it will push some players away. But if you stick with it, read/view the nuggets that Remedy put in, you’ll be able to figure things out. To help you get to the different story beats is the frenetic gameplay.

Control is a 3rd-person action game with platforming elements. As you play through the game, you’ll always have your trusty Service Weapon at your side that can be upgraded throughout the game. The Service Weapon can also morph into different styles of gun like a mini-gun, rocket launcher, shotgun and so forth. You’ll also acquire a selection of telekinetic abilities that will allow you hurl objects and enemies, form a shield, levitate, and take control of enemies. These two, when working in unison, make combat incredible, thrilling, and some of the best combat in gaming today. There’s nothing quite like hurling a rocket back at an enemy, weakening them enough to take control, levitating to another set of enemies and forcing them to fight on two fronts. Control truly shines in its gameplay when it puts you in areas that allow you to go nuts with your powers and weapons. Seriously, it’s a blast.

Control does not come with different difficulty settings, which is fine for the most part. However, there are some areas, including all the boss fights, where the difficulty spikes way up to the degrees where I found myself incredibly frustrated as I died for the 10th time. What makes these areas even worse are the poor functionality of the checkpoint system. While most current games will set a checkpoint at the beginning of these fights, Control leaves a checkpoint at the last save station you were in. While this gives it a classic Metroidvania feel, it seems out of place and like an afterthought more than anything else.

Speaking of Metroidvania, I was surprised at how much the game played like one. Backtracking to previous areas will net you some nice rewards so it is worth retreading old areas as you progress and gain new abilities. However, this, too, is where Control feels dated. One of the thrills of a Metroidvania is progressing your character’s abilities and weapons to allow you passage to new areas, making old areas seem fresh. Control has this in spades but is hampered by a confusing layout and made even worse by a static, flat map that enhances the confusion. Combine this with no markers to toggle on for your HUD and you are left to try to use the map to get to the next area. There were 2-3 instances where I was genuinely lost for upwards of an hour and a half just trying to find my objective or the correct path to my objective. If Remedy had put in a map that I could manipulate in 3D, a flat 2D map that showed verticality like in Super Metroid, or allowed me to toggle objective markers for my HUD, it would be fine. But the lack of those options make traversing the Oldest House a nightmare at times.

The visuals in Control are jaw-dropping. The use of lighting sets a variety of tones with an underpinning of something unsettling. The Oldest House looks normal yet out of place. The use of black and white in the astral plane really create an isolating and strange environment. The use of red tones for the Hiss convey an unnerving sense of evil that is slightly intoxicating. It’s truly a masterclass in effective design. But unfortunately, even with the latest patches, technical issues persist. Having the map open brings about frame rate issues if you attempt to move Jesse with it open. Pausing and unpausing the game forces the game to stutter, almost as if the game needs to start back up like a car engine. There was one occasion where this technical hiccup brought me to a game over screen because an enemy had appeared and killed me. This forced me to make my way back to the area, which, because of the broken checkpoint system, was quite a trek. It’s not a game-breaking issue necessarily but it is worth mentioning.

Control left me very conflicted. I found myself spending more time being frustrated with the game than actually enjoying it. The random spikes in difficulty, awful checkpoint system, and a dated, near useless map, kept me from loving the game. It’s mysterious setting, thrilling combat, and gorgeous visuals kept me playing to see what would happen next. Part of me wishes that Remedy had kept this game as a linear adventure like Quantum Break or Alan Wake. I applaud them for doing something different. I just wish it could have been a little more up-to-date with modern gaming than what it turned out to be.

While I’m not sure how long it took me to beat the game, I did finish the game, on PS4, with 71% of the trophies, doing only a handful of side-quests.

Control is rated M for blood, strong language, and violence. Parents should know that some scenes, and documents, can be unsettling. A character commits suicide with a gun that, while is not shown happening, the images leading up to it make it clear what the character did. The Hiss corrupts and possesses people, causing them to contort and speak with multiple voices. There is language throughout the game, especially closer to the end. The violence in the game is nowhere near the levels of Mortal Kombat but it should be approached with caution if your teenager is interested in the game.

One thought on “Control Review”