Who doesn’t remember as a kid, sitting side by side, with your best friend as you set out to beat Contra, Teenage Mutant Ninja Turtles, or Halo. The appeal of getting to play through a challenging game with your close friend is one that has been lost in many ways in modern game. The removal of couch co-op from Halo 5 is a shinning example of this lost art. This has left many gamers hungry and searching for fun coop games that they can play with a friend or even a spouse.

A Way Out, developed by Hazelight and published by EA, sets out on an adventure that pivots on the strength of it’s online or couch cooperative gameplay. The game has the “audacity” to require that you play the game with another person, but only requires that only one person buy the game. For example, I bought a physical copy of the game, and then upon inviting my friend to play with me, PlayStation prompted him to download a demo version of the game that allowed him to play through the entire game with me on his digital download. This unique feature is one that I have never seen before in video games and one that recreates an awesome environment for coop gaming.

Normally, we discuss the story first for our reviews but for this game, it is necessary to really understand the gameplay mechanisms to understand how they tell the story. 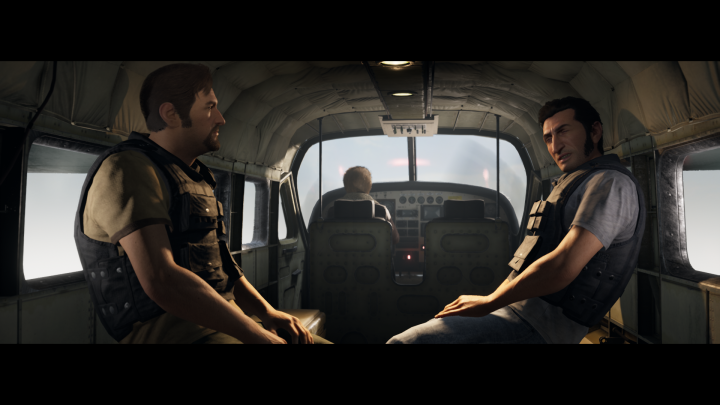 When you and your friend join up, you must both choose which player you are going to control. You can play as the aggressive and loose cannon Leo or the more calm and crafty Vincent. They give a bio and background that allows you and your friend to even discuss who should be which character.

Whether you are playing on the couch with your buddy or across the world, you play the entire game in a vertical split screen except for the few major cutscenes where they focus on one particular character’s dialogue. Using this mechanic, each player can always see what the other person is doing and even hear the conversations they are having. Seeing each player’s interactions, conversations, and actions all at the same time is a really cool aspect of the game. It gives a more complete story and becomes a vital aspect of the certain story situations.

One other fun aspect they add is mini-games across the different locations. You can play connect four against each other, have a home run derby, and many other fun competitions across the world. They are small, don’t get me wrong, but I found myself laughing at my friend and myself as we competed in these silly mini games.

Here is where you really find the greatest aspect of the game, playing it with a friend. My buddy and I found ourselves running around the locations, talking to NPC’s, laughing at each other when one of us missed a button or failed at an objective. While the story has many adult themes, the gameplay makes you feel like a kid again. It was just fun playing the game together, even though the games definitely has its weaknesses.

While playing with a friend is fun, many of the other gameplay mechanisms are pretty standard and mediocre. There are a good amount of quick time events that can be hit or miss. One thing I would suggest when approaching the game is looking at it as an adventure game with some actions more than an action game with some adventure aspects. These things don’t really diminish the game, because it doesn’t take long to understand how their main push is on the coop and story.

As with most adventure styled games, the story in AWay Out really makes the game worth a play. As mentioned earlier, you have the option between two main characters to play with. Leo and Vincent. The game starts by presenting both of them entering prison. You don’t really know why they are there yet, but you quickly understand that they did not now each other beforehand. Through a series of events and epiphanies, their stories become interlocked and the journey to finding a way out of prison begins. 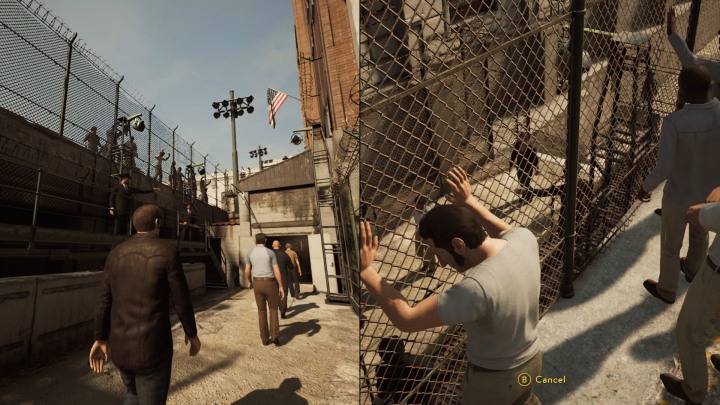 The game is much more than just a prison break game though. I would even argue that the game really takes off once you get out of prison. It is once you get out that the story begins to open up. You get more background on the characters and really begin to care for each of them. I would even say you care for the individual character that you are playing as so much more than the opposing character that your friend is playing as. Character development is something that cannot be discussed enough.

The game then takes you to many different locations with many different twists and turns along the way. One critique of the story is that the pacing isn’t always great. Some locations begin to drag a little or slow down too much as you seek to find one last item to move the story along. And along these lines, there isn’t anything, from my understanding, that would change if I had chosen the other protagonist as my character. Each action and choice that I made along the story could have been made by the other character if they would have found the certain item or snuck into a certain location first. It doesn’t take away from the game, but does prevent me from feeling the need to play through it again. But this game is worth a play through, all the way to the end. The finale of this game is one that I will not forget soon.

For the Christian gamer: There are a couple of scenes that you should be aware of as a Christian gamer. There is a scene early in the game as one of the characters is being checked into prison where you see some male nudity. It is brief but it is also unavoidable. There is also the possibility of some sexual content. I didn’t experience it in my gameplay, but if you take the dialogue a certain way, it can lead that direction. I would encourage you to research it more on the Internet if you are too concerned about either of these things.

If we are being honest, you don’t play A Way Out for great sound and music. You want it there and might notice if it is bad, but it isn’t a main selling point. That is how I would describe the sound and music in A Way Out. It is good and solid, but doesn’t do anything to set the game a part from others and also doesn’t take away from the experience. The 1970’s setting does provide a cool backdrop of music that only drives home the time setting of the game.

One important aspect of the game was the voice acting, which was done really well. For a game that is very much narrative driven and story based, the voice actors really put on a great performance in this game. The characters emotions felt so real that at times, I found myself getting worked up or hit with the feels along with them.

If you are looking for a fun coop game to play with a friend, this is a great option and at the right price. The story is engaging and has an amazing ending! The gameplay, while not perfect, is fun and only made better as you figure out puzzles and what to do with your friend. My buddy and I found ourselves really enjoying the experience because we got to do it together, like when we were kids. In the end, that is what this who game is about, playing with a friend. As an African Proverb says, “If you want to go quickly, go alone. If you want to go far, go together.”