DOOM has had an impressive legacy.

It is widely considered to be one of the greatest shooters ever made and has had an immense impact on the first person shooter genre and the gaming medium as a whole.

id Software, also known for their other cult games like the Wolfenstein and Quake series, had a big challenge on their hands. Years have passed since their last DOOM game and some recent projects (most notably RAGE) haven’t exactly been a hit with critics and consumers. It felt like id Software, once reigning supreme in the industry, was having a hard time fitting into the oversaturated confines of the 21st century. Thankfully, 2014’s Wolfenstein: The New Order proved that id Software still had the chops and bravado to bring us a solid campaign with some fun gunplay to boot. Nearly two years later, id Software has decided to resurrect DOOM into the current generation of gaming and, thankfully, the results couldn’t be any more satisfying (for the most part). DOOM’s campaign is fast, fun, and unlike anything else you might play this year.

For starters, you begin the game having your eternal slumber interrupted by some pesky demons that decide that playing sleeping pranks on you and posting the video on YouTube is a great idea (okay, that last part about YouTube is false). You soon regain your composure and your pretty cool-looking armor and then are unleashed unto the UAC facility on the planet Mars to wreak havoc on the armies of Hell and uncover the mysteries of what truly happened to the once-thriving science research station.

Okay, so maybe it’s not the deepest and emotionally charged story ever, but DOOM is certainly self-aware of this and decides to focus strictly on its gameplay. And this is where the game truly blows you out of the water.

The gameplay certainly feels old school and arcadey, but your main protagonist is able to move across the game’s several levels with lightning speed. The encounters feel fast, ferocious, and brutal, often mixing in a flurry of shotgun blows to a poor sob’s face while quickly turning around and punching a hole through another enemy’s skull. Unlike many modern shooters where the game forces you to slow down, take cover, and periodically peep down your sights to take your enemies out one by one, DOOM does away with that approach and just throws you into the fray.

It is because of this that DOOM’s gameplay can often feel like a melodic dance of carnage, with Mick Gordon’s exceptional head-banging metal score playing in the background as even Hell’s toughest demons begin to outnumber you, making you quickly sprint, strafe, and jump around the arena-styled environments making quick work of your would-be demented creatures. 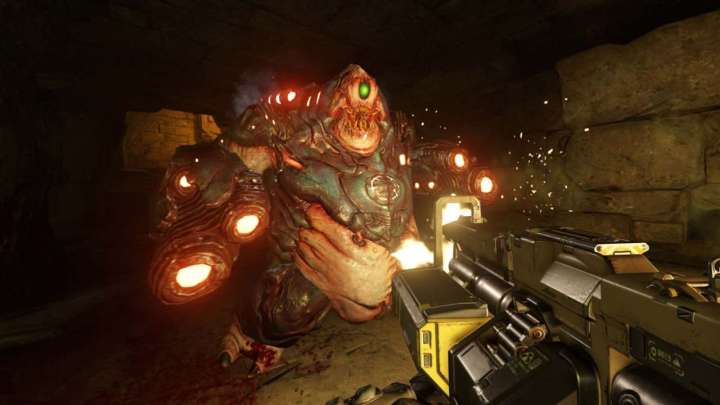 This brings me to another strength of the game: even as the game’s difficulty increases towards the latter half of the campaign, with numerous merciless enemies and bosses, the game gives you a satisfying feeling of invincibility. You truly feel like an uber-superhero who will take no prisoners, not even the 20-foot Hell Baron standing in front of you about to step on you like a piece of chewed gum on a hot summer’s day.

While the no-holds-barred action is the name of the game, DOOM does have some semblance of a story on the surface that does a decent job of guiding you from one level to another. Players themselves will have to explore the depths of that story on their own by picking up journal entries that are scattered throughout the levels (sometimes hidden as secret items). I suggest that one take the time to do so as DOOM’s lore is surprisingly deep and interesting for a game that looks very basic on the surface and from a narrative standpoint. (I am doing my best to save you from some pretty hefty spoilers in this review, so don’t fear).

The AI in DOOM is great as well, often giving the player quite a challenge as each demon class will test the player with different kill tactics being thrown at the player all at once. This keeps the player constantly on the move while dodging a barrage of fireballs, melee hits, and more. The AI also has the ability to run and take cover when it knows that it is being overpowered by your powerful arsenal and will also jump onto crates and higher paths in the level that add a verticality and platforming mechanic to the action.

Weapons range from the iconic shotgun, Gatling gun, plasma rifle, rocket launcher, and a few other surprises that will have series veterans gushing. During combat, the player is allowed to quickly switch weapons via a weapon wheel by holding the shoulder button or key on the PC while using your joystick or mouse to make your next selection. The game will go slow-mo in the background, however, the action will slow down a bit to help the player regain some advantage in the frenzy. But, enemies are still able to damage the player while in this state. This keeps the game from becoming stale and keeps the pressure and the action going for the player as the AI is constantly keeping you on your toes.

Killing enemies will also reward you with HP and ammo on the fly during fights, which is great because it helps keep the flow of the fights going and also rewards players for a merciless playstyle.

Between the massively detailed levels, you’ll encounter a variety of hidden power-ups, secret weapons, and collectibles. You’ll also run into Rune Shrines that unlock special challenges for the player. Once the requirements for the challenge are complete, this will level up your character’s abilities in the campaign like being able to perform melee kills from a farther distance or being able to jump faster from platform to platform. 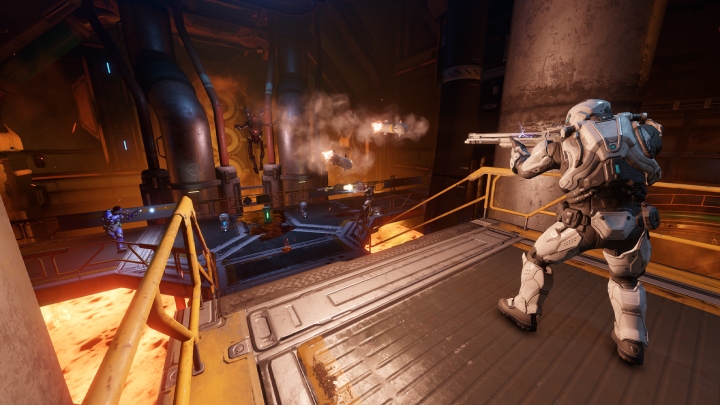 As much praise as I can sing toward its relentlessly action-packed campaign, DOOM sadly falters in its mediocre multiplayer mode. The modes found here are a bit perplexing as the game even lacks simple game modes like Private Matches or even the ability to vote on maps. The upcoming updates will hopefully repair this by a large margin, but DOOM’s current multiplayer is simply unremarkable and uninspired. The multiplayer just feels like a separate product that fails to meet the standards of its other half, and it painfully shows. Some of the best video games on the market contain two separate components of a modern AAA gaming title, campaign and multiplayer, and unify them as a whole (see: The Last of Us, Halo, and even the Call of Duty series). Unfortunately DOOM, well, dooms itself when it comes to this aspect of the game.

Lastly, the game features “SnapMap”, a mode that allows players to easily use tools to build their own multiplayer maps and game modes by uniting rooms via a blueprint-like interface. It’s a fun idea that I can see being used by the community. But, again, multiplayer is lacking so much that I fear DOOM won’t have much of a player base to utilize it. It’s a true shame.

I also have to warn players who may have personal convictions that the game is obviously saturated in demonic content. If you feel that you are sensitive to this kind of material, I urge you to pass on this game.

At the end, DOOM does what it does best: it’s a game that is dumb, and yet self-aware. It does nothing more than provide some of the most fluid FPS mechanics and heart-pumping action that can be found in any game on the market right now. If id Software steps its game up and fixes some of the grievances in its sadly faltering multiplayer, DOOM could really be a full-on spectacular package. As of now, the campaign itself is worthy of a playthrough and I cannot recommend it enough to those seeking what is, by far, one of the best shooters this year.

One thought on “Doom Review”